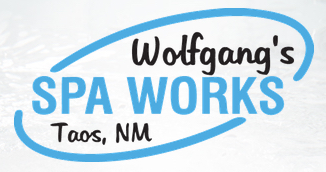 Update, on March 20th I added a page depicting additional pieces which were stolen during this burglary.  Please take a look.
During the early morning hours of Sunday, May 13, 2018 an unidentified individual smashed a window at Emily Benoist Ruffin Design (Goldsmith) located at 119 Bent Street, Taos and gained entry.  Once inside, the individual smashed several display cases and stole a number of pieces of jewelry.
Attached are representative photos of 2 gold bracelets which were stolen, these are NOT photos of the actual pieces.  The actual first bracelet has diamonds all the way around it but one of the diamonds has been replaced with a blue sapphire.  The second actual bracelet has one diamond set in a white gold bezel rather that the one prong setting as shown.
If you have information which leads to the arrest and conviction of the thief, or the recovery of these two bracelets you could earn a reward from Crime Stoppers.  You can submit an ANONYMOUS Tip from this website or by calling 575-758-HALT (4258). 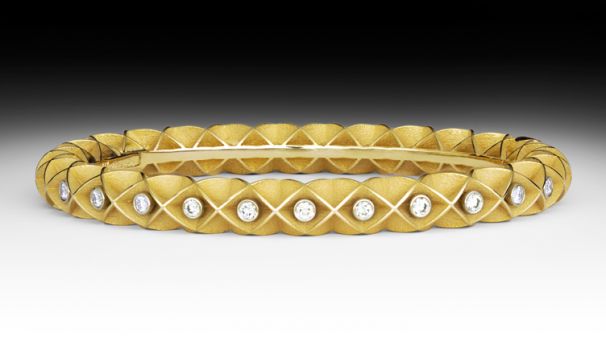 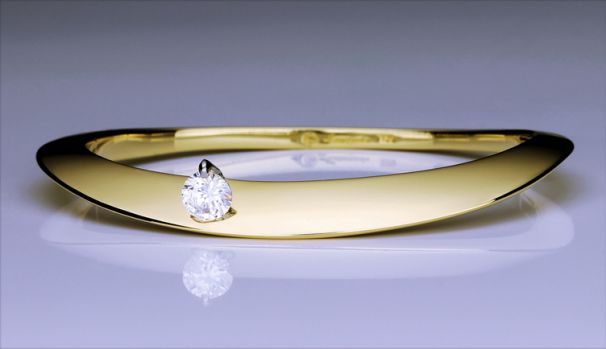 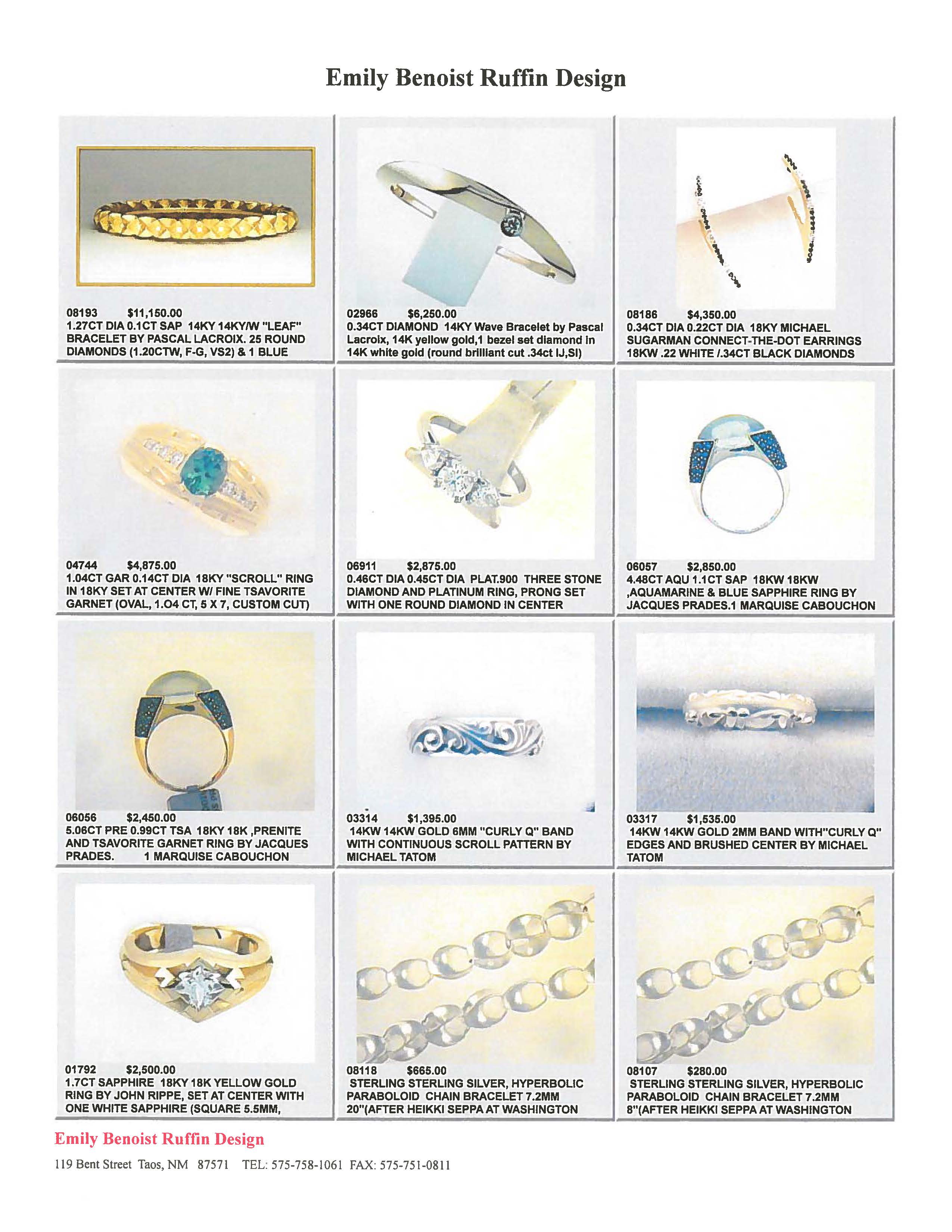 On or about March 24, 2018 an unknown person or persons stole several packages off the front door step of 304 Ortiz Street in the Town of Taos.  One of the packages contained 2 custom made bolo ties which were intended to be worn during a wedding to take place in Taos this weekend.  The other two packages were AMAZON packages.
If you have any information that would lead to the recovery of these bolo ties or that would lead to the arrest and conviction of the thief, you can contact Patrolwoman Elise Iringan at the Taos Police Department, 758-4656 or, to remain anonymous; you can call Taos County Crime Stoppers at 758-HALT (4258) or make a Tip from this website. 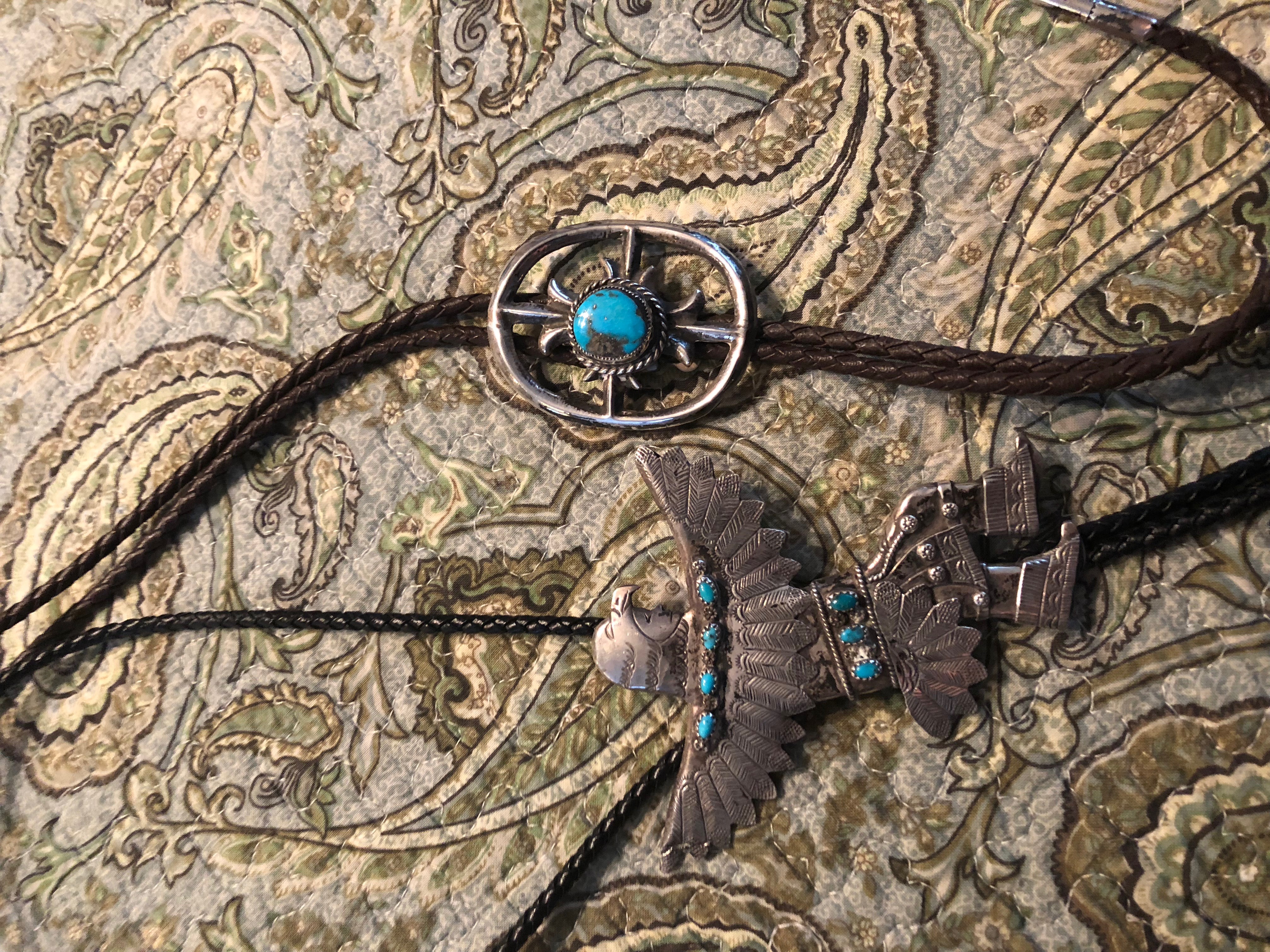 Taos Police Department Case #1711T0578, Larceny
During the early morning hours of November 25th, 2017 (between 1:00 am and 4:30 am) a person or persons unknown illegally entered a white van bearing Oklahoma license plates that was parked at the Hampton Inn in Taos.
The owner of the van and his son were visiting from Oklahoma and the son was participating in a local hockey tournament.  The thieves stole the son's hockey equipment and the father's empty hunting bag.  The amount of the theft is in excess of one thousand dollars.
If you have information the would lead investigators to the identification of the thieves or the recovery of the Victim's property please call the Taos Police Department at 575-758-2216, or to remain anonymous make a Crime Stoppers Tip by calling 575-758-HALT (4258) or use the Make a Tip button on this site.

Someone stole a primer gray, 1979, 2 door, Ford F-250 Super Cab pickup from Ledoux Street today.  This truck has a Raiders plate on the front bumper and tinted windows.  There was no license plate on the rear bumper at the time it was stolen.
If you should see this truck, please call Jay at 575-425-9614 or the Taos Police Department, or to remain ANONYMOUS, contact Taos County Crime Stoppers on this page or call 758-HALT (4258).

During the last two months, the Town of Taos has experienced an increase in Criminal Damage to Property cases.  We would very much like to solve these cases and hold the perpetrator(s) accountable.  If you have any knowledge of the person or persons responsible for the damage in these cases please contact Taos County Crime Stoppers at 758-HALT (4258), our mobile app. P3 Tips or our website; www.TaosCountyCrimeStopper.org.

Once again, if you have any information which would help us solve these cases please call the Taos Police Department at 758-2216, of to remain ANONYMOUS contact Taos County Crime Stoppers and leave up a TIP. 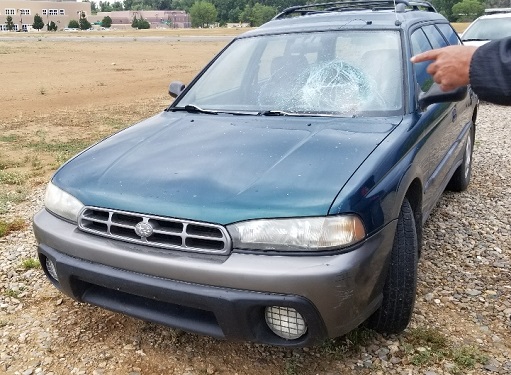 Taos Police Department Case #1705T0457, Criminal Damage to Property.
Sometime during the overnight hours of May 18th -19th a person or persons unknown slashed 18 commercial truck tires in the parking area of Rio Grande Propane located at 320 Paseo del Pueblo Sur. The owner estimates the damage to his property to be about $10,000.
Investigators with the Taos Police Department are seeking any information which would lead to the identity of the person or persons responsible for this criminal act. Messages can be left for Officer LeEvan Sanchez at 758-2216 or to remain anonymous, call Taos County Crime Stoppers at 758-HALT (4258) or leave a Tip online at www.TaosCountyCrimeStoppers.org or use our mobile app; P3 Tips. 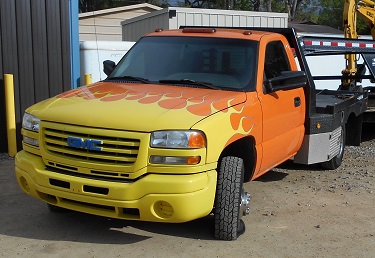 On Saturday night, February 11, 2017, at approximately 9:00 pm an unknown person or persons intentionally set fire to this truck. This arson occurred at 1355 State Road 75 in Penasco, NM. If you have information which would lead to the arrest and conviction of the person or persons responsible for this crime please call the Taos County Sheriff`s Department at 575-737-6480. Or, to remain ANONYMOUS call Taos County Crime Stoppers at 575-758-HALT (4258) or click the "Give A Tip" button on the left side of this page. You can also leave an ANONYMOUS TIP using our secure mobile app "P3 Tips" from your iPhone or Android phone. 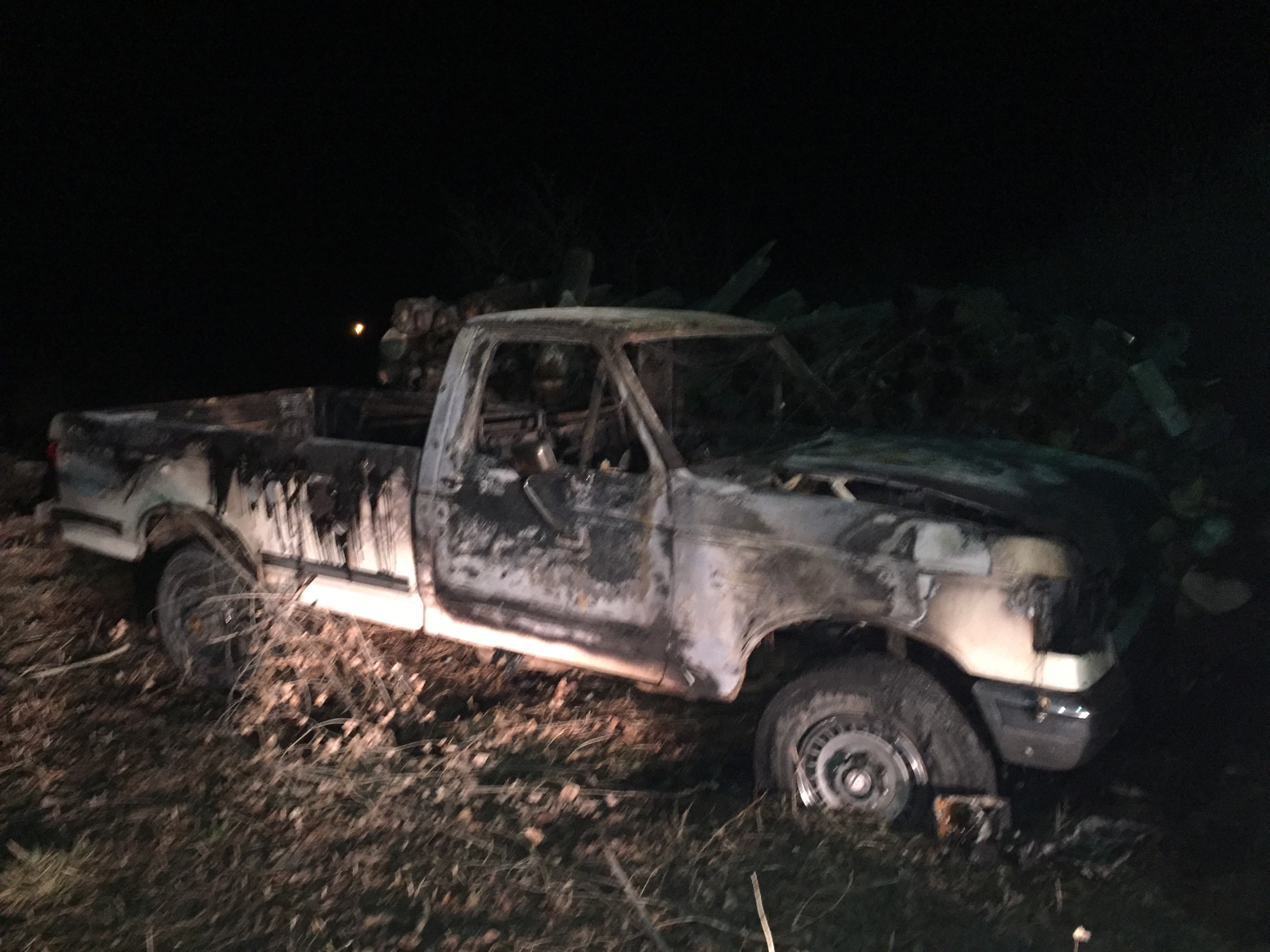 Suspect #1 appeared to be wearing a (possibly green camouflage) bandana type mask, he had on a white shirt under his hoodie and wore white tennis shoes.  He was armed with what appeared to be a white or silver semi-automatic handgun and wore greenish gloves.

Suspect #2, the largest of the 3, appeared to be wearing dark blue pants, black shoes, a Halloween type mask and possibly blue exam gloves.  He brandished a black semi-automatic handgun.

Suspect #3 also wore a dark hoodie with what appears to be some type of black cloth over his face.  His pants were too long and were frayed on the bottoms, partially covering his dark color tennis shoes.  He was armed with a stainless steel revolver and wore black gloves.

All 3 suspects were right handed and they were in and out of the store in less than 1 minute.  Only a small amount of cash was taken and no one was injured.

If you have any information about the individuals who committed this Armed Robbery please contact the Taos Police Department at 575-758-2216, or to remain anonymous call Taos County Crime Stoppers at 575-758-HALT (4258) or click the "Help Solve this Crime" button below.  You may be eligible to earn a Reward of up to $1,000. 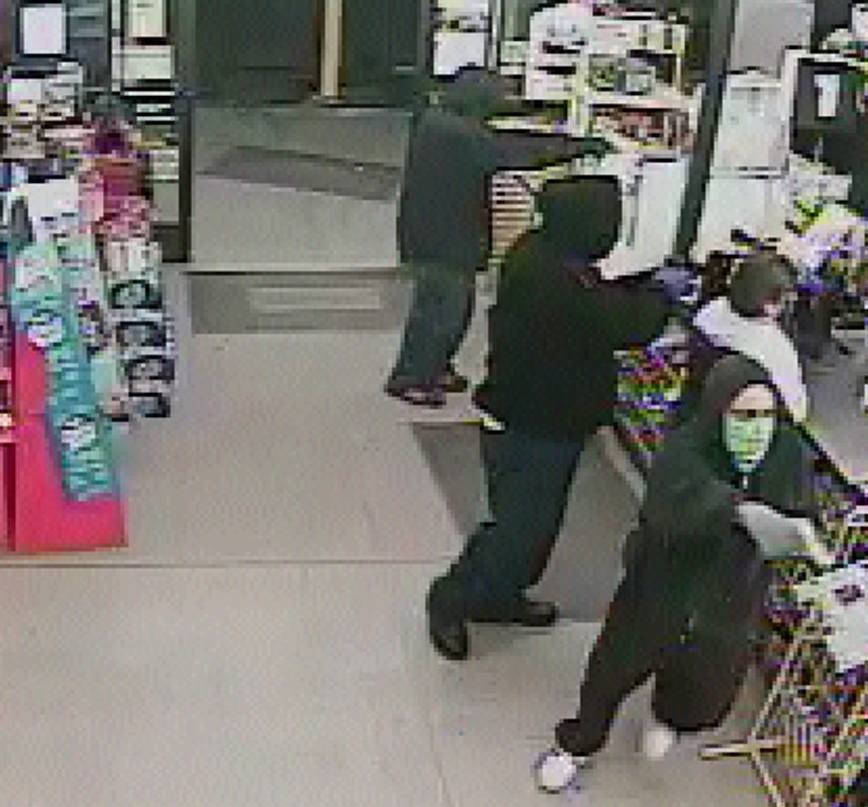